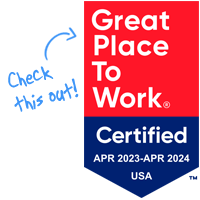 Ruby+Associates is proud to announce three promotions within the firm’s engineering department.

Katrin Bosch, PE, Marinna Harris, PE and Erik Ohlsson, PE have been promoted to the position of Project Engineer II.

Katrin Bosch, PE has been with Ruby since 2013 after graduating from Lawrence Technological University with dual Bachelor of Science degrees in Civil Engineering and Architecture.  Her engineering work with Ruby has included everything from high rises, soccer stadiums and ice arenas to automotive plants, amusement park attractions and correctional facilities. Katrin is a member of Ruby’s Culture of Quality Team and Article Review Club. She has presented engineering basics to elementary-aged students and participated in the American Heart Association Go Red Goes STEM Event in Detroit as a panelist and mentor.

Marinna Harris, PE has worked for Ruby since 2013 after receiving her Bachelor of Science degree in Civil Engineering from Lawrence Technological University. While at Ruby, she earned her master’s degree in Structural Engineering from the University of Michigan in 2016. Marinna’s focus on building design projects for Ruby has included corporate headquarters facilities, office and retail buildings, a higher education wellness building, as well as design and analysis work for heavy industrial clients. Marinna is a member of Ruby’s Technology Team and University Recruiting Team. Like Katrin, Marinna also participated as a panelist and mentor for the American Heart Association Go Red Goes STEM Event in Detroit.

Erik Ohlsson, PE joined Ruby in July 2019 after gaining seven years of experience with other A/E firms. His work with Ruby has included construction engineering services for some of Ruby’s largest clients with various projects in the shipping and automotive industries. He has managed technical portions of some of Ruby’s most complex projects, and he is a member of Ruby’s Design Software Team.